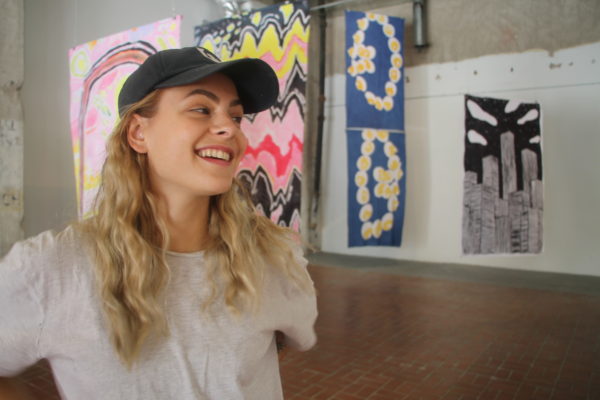 Steef Crombach is an artist from the Netherlands. Batik is a wax-resist process for dyeing textiles that’s been practiced for centuries. Together, they complicate the boundaries of fine art with what the artist refers to as her “hacked batik” process.

Crombach’s first experience with batik was in her primary school art class. “I believe I made a flower with a terracotta background,” she says. Though batik is traditionally associated with Indonesia, the unique approach to dying fabric traveled to The Netherlands in the wake of colonialism. By the time Crombach was exposed to it, it was thought of as a handicraft — something your grandmother may have learned in a home-ec class.

But it was a trip to Austin in 2015 that led Crombach to revisit the medium. “I was inspired by the many flags you see everywhere and the strangely sweet smell that lingers in Austin when you drive from Airport Boulevard toward Congress Avenue.” Crombach told me. “I wanted to make a bacon flag and figured that painting with wax, which is in a way just creating a grease stain, would work very well with the bacon pattern and the literal grease that I was trying to depict.” 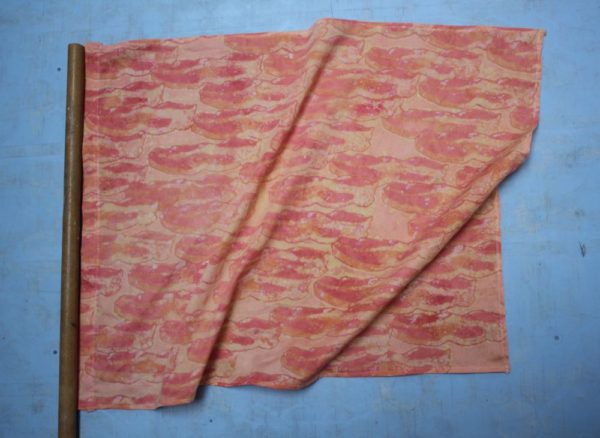 After two years of perfecting her process, Crombach returned to Austin to curate Expedition Batikback, showing at Co-Lab Projects’ DEMO Gallery through August 26. The exhibition involves Crombach and eight additional artists to whom she taught the process. She explained as she walked me through the show: “Seeing different contemporary works being made in this technique made me able to look at my own work more critically. The quality of the work can’t only be about the technique in which it’s made.”

And there’s a line from Crombach’s artist statement that feels relevant not just to her work, or to this show, but to the infinite malleability of the arts: “I feel like I enable people to see … which aspects of our present time will be part of our collective memory when we look back.” It’s a statement that seems as much about the way we see as what we see.

When asked about the link between her perceived role as an artist and her use of batik, she says, “My direct environment, and mainly the things that are so ingrained in our culture and field of vision that we don’t recognize their strange qualities anymore, inspire me a lot. To highlight batik and bring attention to its unusual qualities — like the fact that these works are double-sided — brings it out if this pre-assumed corner before it might disappear completely out of our direct environment. It’s already getting hard to find the batik tools in The Netherlands, so I feel like I’m right on time.” 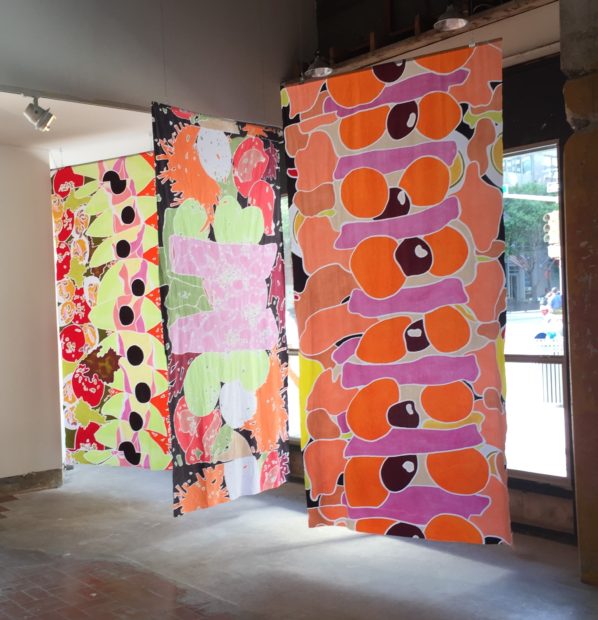 The artist readily admits that she’s taken liberties with batik, always looking for ways to make the medium fit her style and aesthetic. “I started off using soy wax and store-bought fabric dyes on the tile floor in the house where I was couch surfing near Barton Springs,” Crombach said of making the early bacon flag. “Since that time it’s been trial and error, using different waxes, dyes and application methods to end up with the batik-inspired work I make now. You might call it ‘hacked’ batik since I can achieve a broader spectrum of color with fewer steps.”

Authenticity is not the only thing Crombach navigates in her use of batik. In The Netherlands, when she had not yet established a context for the work, she struggled with having her batik work accepted and shown as fine art. “As soon as people see ‘batik’ they stop reading,” she told me of her early attempts to have the work shown. “The association with batik is not what I’ve done with it.” But in the intervening months, it seems that impression has changed. One of Crombach’s batiks will be on show at the Royal Palace in Amsterdam this October because of her nomination for the Royal’s painting prize. It’s a reminder that we tend to stop seeing the artistic potential of techniques we’ve allowed to become quotidian or passé. 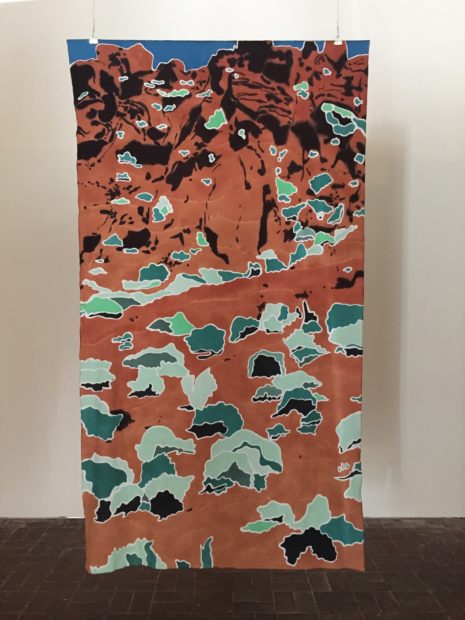 Crombach realizes through her experience of teaching the technique to other artists that it’s not batik’s re-introduction that makes this show work so well, but rather the ways a process can be reimagined.

“That the artists loved working with batik so much… and that the visitors embraced batik’s unique qualities, definitely pulled it out of the crafty corner it was in,” Crombach says. “In a way, I feel it has almost lost its attraction to me, and that I will have to find a new and unique medium all over again… . But maybe the newfound love for this forgotten technique — the new works that were made and this amazing show that came out of it — are a higher goal than being exclusive about how something is made.”

‘Expedition Batikback’ is on at Co-Lab Projects’ DEMO Gallery in Austin through August 26. Images courtesy Bill Mullarky and Steef Crombach.

The Highs and Lo-Fi’s of Adrian Armstrong

Austin’s Hail Mary Attempt To Save the East...

Yinka Shonibare MBE at the Fort Worth Modern

Jennifer Arnold: The Closet & The Bedroom

Jennifer Arnold: The Closet & The Bedroom